‘Smithy’ came to High Peak in 2010 by sheer opportunity – he knew some guys from Colorado who wanted to hunt in New Zealand, and he wanted somewhere he could take them and show them a good time. How Smithy met these guys and others like them is a great story in itself. When he’s not running around the hills chasing a hunter who’s in turn chasing a stag, Smithy can be found on the heaving deck of a big game fishing boat, capturing the moments that make landing a big marlin such an adrenaline rush. Once he has the shots he’s after, he then take brush to canvas and turns the whole story into an original work of art.

The photographer / artist approach makes Smithy pretty much unique in the NZ hunting scene, but that’s only a fraction of what he brings to the table. This man has has a collection of war stories as long as your arm, covering everything from teaching art, to croc wrangling in Northern Australia, to sailing the high seas and even being president of a prominent local motorcycle club. They’re stories best told by him and it’s these stories that our clients remember most about their time with Smithy.

Fair to say, he’s been there and done that, but in the end he has wound up where his true roots are – back in Canterbury with his family, and running around in the bush, hills and mountains of New Zealand chasing animals. And we’re very glad that’s where he wants to be. 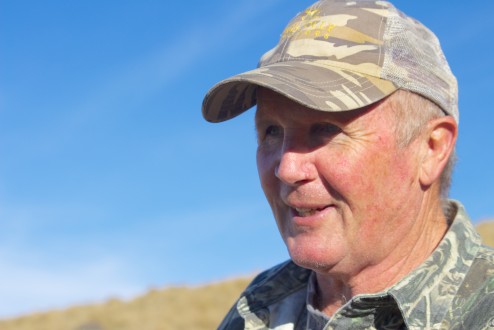