In the eye of the hunter: What makes a good Red Stag trophy?

This is a question that crops up often. Any serious hunter planning a New Zealand hunting adventure will want to go home with ‘a good trophy’. Each will have a mental image of their ideal Red Stag hunting experience, which is most likely based on the trophies and imagery they have seen. With that image in mind, hunters still often need reassurance that the animal in the scope is what they really want.

The criteria for a good trophy?

One obvious answer is score. A high-scoring set of antlers will likely be more impressive in a number of ways than a lower scoring head – more points, bigger beam, heavier, wider, but not necessarily.

Other hunters might look for symmetry – a nice, even, well-balanced head is pleasing to the eye and makes an impressive good trophy. A good number of High Peak hunters look for what they term ‘a strong representation of a good red stag’ – which we take to mean an impressive example of something they might expect to find in the wild, as opposed to a selectively-bred monster score animal.

Each set of antlers is totally unique.

There is no simple answer as to what makes a good Red Stag trophy. This is what makes these animals so sought-after. Because no two sets of antlers are the same, Red Stags are possibly the most individual any big game species. Each trophy is an individual expression of the personality of the hunter who chooses to pit his skills against that animal. 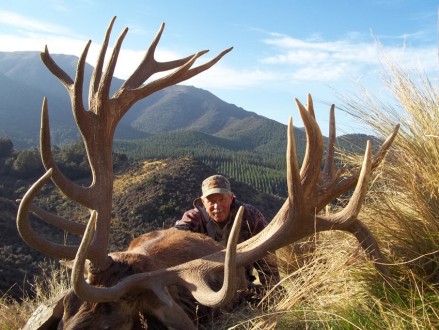 The other part of what makes each trophy such an individual entity is the story. Each set of unique antlers belies a similarly unique hunting tale that is solely the hunter’s to tell – and many would claim the story is the most important part of what makes a good Red Stag trophy.

Beauty is in the eye of the gun-holder.

So there we have it – what makes a great Red Stag trophy is purely in the eye of the hunter. There may be ways of quantifying the physical attributes of a head, but this barely scratches the surface of why we hunt. If a hunter believes he has a great trophy, and wants to tell you about why he thinks it’s great, then it may well be worth listening to him tell his story. If you’re lucky enough to get one of your own and you think it’s a good trophy, then it is.